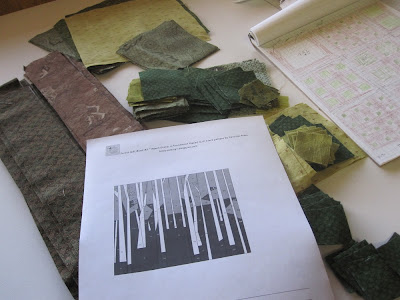 I'm afraid it's been one of those weeks that I've barely been able to do any sewing.  It's Spring Break season, husband's been traveling, and for the first time ever, I've had both boys in school sports.  Volunteer work and much general "life" stuff has kept me busy as well.

I was hoping to have a Forest QAL block done, and a Project Quilting quilt done, but it's just now going to happen this week, or possibly next.  This is about how far I got before throwing in the towel.  I printed off the Forest QAL pattern, and got a plan and started cutting out fabric for the Project Quilting Challenge, which is "Spring".

I was going to make a quilt based on the "Square Foot Gardening" book / method, which was the first one we used when my husband and I lived in a tiny duplex apartment which had about a 5 by 12 foot piece of dirt that we could use.  Over 20 years later, we still use many of the concepts in this book, especially trellising many of the vine vegetables, such as cucumbers and winter squash.

I hope you all are having a great Spring!